Harness the longevity health and healing power of peptides.

To save 10% off your order, use the code Longevity10 when you click your order link below and checkout with Integrative Peptides

Peptides are short-chain amino acids found naturally in the body. Amino acids are the building blocks of protein and these particular amino acids are designed to augment specific functions within the human body.

Therapy with peptides uses those sequences already present to regulate and rejuvenate functions, basically, they bind to and tell other cells what to do, replacing or mimicking the functions of naturally occurring peptides. Peptides have the capability to rewrite body chemistry relationships to promote restoration, anabolism, and homeostasis.

BPC stands for Body Protective Compound, and that is exactly its function. It was originally discovered to be a protective peptide within our gut and to have a healing effect in both our upper and lower GI tract.

CLICK HERE TO PURCHASE from our partners at Integrative Peptides.

A physician’s go-to for multipurpose therapy, BPC-157 is most renowned for its healing and regenerative qualities. Studies have found that this peptide encourages gut health, tissue regeneration, and a balanced immune and inflammatory response as well as supporting a myriad of other body systems.

KPV Ultra oral spray contains 500 mcg of the active bioregulator fragment of α-melanocyte-stimulating hormone (α-MSH), which is considered to be one of the body’s most potent regulators of normal immune balance and mast cell system stimulation.

KPV Ultra has been formulated into a peppermint-flavored liquid spray to achieve rapid absorption.

Several studies have previously shown that KPV has decreased inflammation and tumorigenesis in the body. The KPV anti-inflammatory effect is PepT1-mediated in intestinal epithelial and immune cells. PepT1 is an oligopeptide transporter that is overexpressed in the colonic epithelial cells of chronic ulcerative colitis, which can deliver KPV into the cytosol in the intestine. The tripeptide, KPV has significant antimicrobial and anti-inflammatory properties, especially in those with psoriasis. Psoriasis is a chronic autoimmune condition that causes the rapid build-up of skin cells and is usually treated using hydrocortisone. In people with psoriasis, KPV has shown to limit symptoms of the condition including itchiness, dryness, redness, peeling, and more. Therefore, KPV could be used for an extended period of time without risking the unwanted complications of long-term steroid therapy. KPV is a promising, therapeutic treatment for inflammatory bowel disease (IBD), colon cancer, and inflammatory skin disorders, in particular, psoriasis.

Thymosin is a hormone secreted from the thymus. Its primary function is to stimulate the production of T cells, which are an important part of the immune system. Thymosin also assists in the development of B cells to plasma cells to produce antibodies. The predominant form of Thymosin, Thymosin Beta 4, is a member of a highly conserved family of actin monomer sequestering proteins. In addition to its role as a major actin-sequestering molecule, Thymosin Beta 4 plays a role in tissue repair. Tβ4 has been found to play an important role in the protection, regeneration and remodeling of injured or damaged tissues. The gene for Tβ4 has also been found to be one of the first to be upregulated after injuries. Thymosin Beta 4 is currently being trialed as a potential therapy for HIV, AIDS, and Influenza. Thymosin Beta 4 is most often prescribed for acute injury, surgical repair and for senior athletes. It has most recently been shown to help regrow hair in addition to PRP. 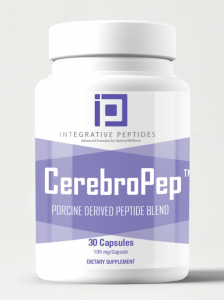 A special formulation of a porcine-derived peptide blend brings the highest standard in quality and safety to support cognitive health and well-being. Similar to other porcine neuro peptides such as Cerebrolysin, which is administered through injection, CerebroPep™ marks the entrance of Integrative Peptides into the neuro and cognitive space without a needle.

Disclaimer: *IMPORTANT! All information presented in this website is intended for informational purposes only. Statements made on this website have not been evaluated by the Food and Drug Administration. The information contained herein is not intended to diagnose, treat, cure or prevent any disease.

Discover how you can leverage your expertise to scale your income, influence and impact as you live your purpose and change the world.